The Dean of SEGi Faculty of Dentistry Dato’ Prof. Dr Ahmad Termizi Zamzuri, was there to support and cheer for the team.

Their hard work has paid off, with the team winning their group matches and qualifying for the semi-finals. In the semi-finals, the SEGi Dental Futsal team defeated MAHSA University 5-1, solidifying their place in the finals against International Islamic University Malaysia. 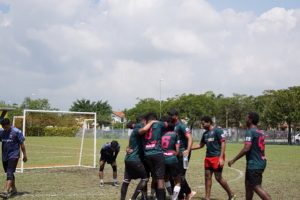